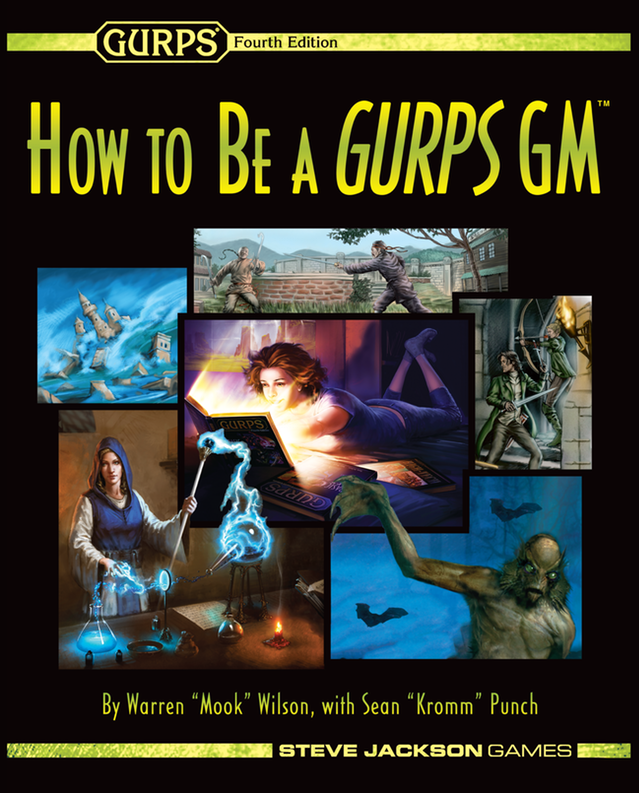 Every now and then a book comes along that encapsulates a subject, a general history or study of a subject that provides something for both beginners and experts. In the hobby of roleplaying, there aren’t a lot of these books. The first one that springs to mind is the classic, Role-Playing Mastery by Gary Gygax. That’s an essential book that is sadly out of print. Probably the first book about the “art” of roleplaying rather than the rules, Gygax offers timeless advice for both players and game-masters. Experienced GMs and players will likely consider some of it “old hat,” but I find it refreshing to re-read sections of the book. Gygax does not focus on any particular system, since roleplaying itself is essentially “systemless,” but he does include examples or anecdotes from both Chainmail and Dungeons & Dragons. Despite it being written in the dark ages Before GURPS, this is a book I recommend highly to many people, especially GURPS GMs. 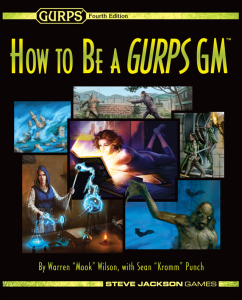 How to Be a GURPS GM is one of those essential tomes for those who want to run a GURPS game or campaign. Written by Warren “Mook” Wilson and populated by advice from Sean “Kromm” Punch (the GURPS line editor and pretty much final authority when it comes to GURPS canon and rules arbitration).

Mook Wilson is an very good adventure creator and an excellent game-master, with a very player-oriented philosophy that is focused on providing entertaining challenges in his games. People literally line up for his games three times a year at Strategicon. His roster usually fills up before the convention even begins. Though Mook is first and foremost a GURPS player and GM, he also explores far and wide among other systems in search rules and procedures that other systems or GMs employ. On his website he discusses a lot of these explorations, and also provides play reports on his convention games. Mook also started and continues to moderate a Discord server that has fast become a central location for GURPS players and GMs, especially those organizing online games. Simply put, Mook one of the best “human resources” that GURPS and GURPS GMs have at this time. His overall guiding philosophy of “Fun Trumps Everything” is a refreshing and inspirational approach in a game system with a reputation for being “rules heavy.”

GMing is hard work and How to Be a GURPS GM breaks it down into easily digestible chunks. Assisted by quotes from GURPS line editor Sean “Kromm” Punch, Mook provides a great deal of practical information aimed at beginning GMs or others who lack GURPS experience. THE GURPS publication line is as numerous and complex as that of any role-playing system, so the first chapter provides outlines and summaries of the primary rulebooks. Campaign planning can be intimidating and the goal of this section is to get the GM started. In the following pages, there is a handy list of recommended books, organized by genre. The difference between “cinematic” and “realistic” is one of the more oftly debated matters among GURPS players, but Mook provides some characteristics that clarify the differentiation. If there’s any question, a sidebar offers a ready index to the location of “Cinematic Rules” found in the Basic Set. Further deliberations on rules, power level, and character traits guide the GM through the basic or initial planning of any campaign. The second chapter provides a detailed example of campaign preparation that follows the outline described in the first chapter. Making the process even less intimidating is a detailed Campaign Planning Form is provided at the end of the the book.

The third chapter of the book takes a look at the more “creative” aspects of planning a campaign. Once again Mook details the usefulness of the Basic Set and other GURPS books as the GM begins to “world-build” for the campaign. While the chapter does not provide the amount of detail necessary to guide a player through the creation of a fantasy world, it is an excellent guide to the creation of a single adventure. This skill is a direct route to designing campaigns: as any experienced GM can tell you, a campaign is not much more than a series of adventures unified around something. As I mentioned earlier, the advice here comes from an author who runs several games at conventions throughout the year. The most common GM experience is running games for your friends; devising and managing games for complete strangers is a wholly different skills. In the case of GURPS, not only does the GM have to provide an entertaining adventure but also often has the onus of introducing new players to the rules. Odds are that a first-time GURPS Gm faces this very dilemma, and Mook’s advice is particular to this point. He provides very practical guidelines on the use of certain skills to gain information and face challenges, as well as the benefit of his experience with handling a variety of players.

Mook spends several pages discussing the design of NPCs, offering a quick and pragmatic method of balancing NPCs against the power-levels of player characters. Analyzing the importance of Setting, in the following section he takes offers sound direction on the design of the environment in which player characters exist. Once again reference to page numbers across several rule books provide a handy index. As with the previous sections, the follow-up to chapter three is a worked example of adventure creation using the methods outlined in the previous chapter. Mook writes scenes as they might appear in a written game adventure and provides possible outcomes to the skeletal scenarios he describes. The fifth chapter is focused on running an actual game or campaign, with an extensive consideration of the GM role itself. Some of the best advice in the book appears here, useful even to experienced GMs. I have applied almost all of it to my long-running online games.

Chapter six is dedicated to a significant subject, one where GURPS has a contentious reputation among players of other systems: Combat. GURPS combat notoriously takes forever to play out, a not-undeserved reputation that has unfortunately becomes something that people think is undeniably true and even inherent in the system. The GURPS combat rules are flexible and customizable, making them likely more complex than other systems. After all, GURPS rules of combat essentially have to be complex enough to be generic and universal. By design, the combat rules of any non-GURPS roleplaying game can likely be described using GURPS rules. To speed combat, it is necessary that a GM make certain decisions regarding combat rules. Here Mook provides guidelines essential to any GM considering just how lethal or fantastic combat will be in a campaign. Several proposed lists of rule choices are given to address a variety of campaign styles; a GM who wants “light and quick” combat need merely choose the appropriates set of rules. Extensive consideration of combat skills and weapon choices, along with magic and psionics in combat, complete this chapter of the book. It is once again followed by examples of the considered rules and other situations in play.

When Steve Jackson announced their Dungeon Fantasy Kickstarter, it was good to see that Mook’s book would be one of the items awarded to backers. It was further pleasing to learn that the company would be placing the book in their print-on-demand titles. The book is simply a must have for any GURPS GM, regardless of experience. New GMs will appreciate the advice on running a table; experienced GMs may gain something from Mook’s advice on player management, particularly guiding new players through character creation. As a longtime follower of Mook’s blog, I can say that his insights on players have helped me considerably over the years. Awareness and consideration of his “player-positive” attitude has helped shape me into a better GM. Those who need little advice with the social aspects of running a table will no doubt find Mook’s indexing and summary of various rules, along with their practical applicability in actual play, to be helpful and perhaps indispensable.